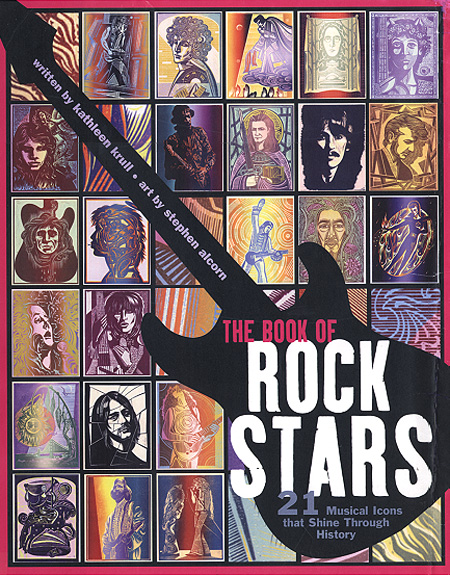 
Twenty-four of the greatest icons of rock 'n' roll are celebrated with mini-biographies and colorful relief-block prints. Readers will learn intriguing new information about the singers and bands through behind-the-scenes stories, facts, figures and entertaining anecdotes. And where the words leave off, the bold and stricking portraits by celebrated artist Stephen Alcorn complete the picture, bringing the stars to life. For old and new fans alike, The Book of Rock Stars is a music lover's dream.

Kathleen Krull, author of several well-received books, has produced a collection of brief biographies of 24 contemporary artists who she feels were truly innovators or daring experimenters. Subjects range from Bob Marley to Joni Mitchell to Chrissie Hynde to Kurt Cobain. In her introduction she warns that many of her subjects are not ideal role models, in that their lifestyles may dismay some parents, but maintains that their music can still thrill us. Most entries are one solid page of text (The Beatles merit four). The essays face Stephen Alcorn's original full-page illustrations featuring striking block-print graphics. Bold fonts and vibrant colorshighlight the articles, which outline basic facts, provide justifications for inclusion in this selct group, and trace musical influences and artistic development. The tone is irreverent and energetic, and may help expand reader's vocabularies. The work's visual appeal is extended through the "Further Reading" section, which color codes sources according to reading, surfing and listening modes. While not a primary resource tool, this light-hearted offering will compliment standard biographical resources. Collections that serve clientele with proven interest in this topic should expect this exhilarating offering to fly off library shelves, and may want to consider multiple copies. RECOMMENDED.

Krull takes her remarkable gift for witty, brief, and incicive biography to new hights in this compendium. Most of the artists get a single page (the Beatles get more) facing one of Alcorn's fabulous polychrome re;lief-block prints. Her choices are sound: Elvis to Kurt Cobain, and a host of people who only need one name: Dylan, Jimi, Joni, Santana, Bono, Bruce. She captures the essence of their music in ways that will send young readers to their parents' or grandparents' music collections (a fine list of sources includes a book, a website, and a CD for each artist). Alcorn's dramatic images use the texture inherent in his medium to make beautiful contrasts of patterns, and color creates almost psychedelic light-and-dark effects. He uses iconic imagery brilliantly: showing Bono with a sword and a halo; Cobain as a broken mirror. Readers will be sobered to see just how many of the dead rock stars died because of drug use, but krull never equates their creativity with their excesses. (Biography. 9+)

Grades 5-8 -- Concise, single-page entries chronicle the accomplishments of 24 icons of the rock stage. Krull has chosen the most influential of subjects -- entertqainers, who added elements of rhythm and harmony, innovators of intstrumentation, and commentators on contemporary life. Biographical sketches, from Elvis (b.1935) to Kurt Cobain (b.1967), include the controversies of public and private lives without sensationalizing. Each entry is paired with one of Alcorn's inspired, eye-catching illustrations. Startling pop-art portraits in polychrome releif-lock prints with folk and religious motifs face text in varying colors and fonts, while a thumbnail representation of each portrait decorates the cover. Krull's work recognizes th eimpact of the art without judging the sometimes antisocial actions of the artists. This slim volume will rock th eresearch of younger music enthusiasts.

For those of us who think wistfully back on the pop icons of our youth, today's image of our former music heroes as wizened elder statesmen (and women) is a harsh reminder of time's relentless passage. True, as of this writing, the Stones are on tour, but even if, from 20 rows back, it smells like teen spirit, up close it is a different story.

Leave it to illustrator, painter, and printmaker Stephen Alcorn to restore rebellious vigor and meaning to past icons who have lost their luster. "As I look back on those years, I am struck by the extent to which music in the second half of the 20th century served as both a catalyst and a mirror to the social unrest" he says. Through the impressionable eyes of a child, Alcorn witnessed first-hand the musical counter-culture of the Woodstock Generation and saw there a positive force for social change. "I have always considered myself my good fortune to have come of age undr a torrent of creativity."

Alcorn's "Modern Music Masters" series (www.alcorngallery.com) is the most recent of a cycle of portraits he has created over the years. Here, he pays homage to the musicians who have provoded a musical backdrop to our lives. He decided to include those early pioneers who influenced the musci he grew up with, and their descendents as well. The series has many twists and surprises, intentionally playing on mythos (McCartney as satyr, Jagger as saint) but also right along with it (Bono as crusader and Elvis as Angel). One of the most poignant pieces is also the starkest: a black and white portrait odf a shattered Kurt Cobain. Many emmplu symbolism that is not readily aparent but affect us subconsciously.

The result of a quarter-century of experimentation with relief-block, the series is in many ways as inspirational as the music it celebrates.


In prose lit with unabashed hero worship, Krull profiles 24 rock stars, from Elvis to Kurt Cobain. In investigating their legends, she's occasionally evasive: Was Dylan actually hooted off the stage for going electric? Did Jim Morrison really expose himself? Still, for encapsulating rock's archetypal tales of rags to riches, spectacular flameouts, and primal music making, Krull's hard to top for energy and passion. Alcorn's full-page polychrome relief-block prints hark back to to the psychedelic posters of the '60s, presenting Elvis as God; Bono as, at least, a saint; Bowie as an alien (of course); and the faces of Janis and Bob Marley glowing like elementals within writhing masses of hair. Readers will not only be caught up in the swirl of one of the past century's central cultural currents, but also find this an irresistible gateway to the music. Krull closes her encomium with systematic lists of recommended books, recordings and Web sites, so readers can find out more.


No part of this web site may be reproduced, in any form, by any means,
including mechanical, electronic, photocopying, or otherwise,
without prior written consent of Stephen and Sabina Fascione Alcorn.